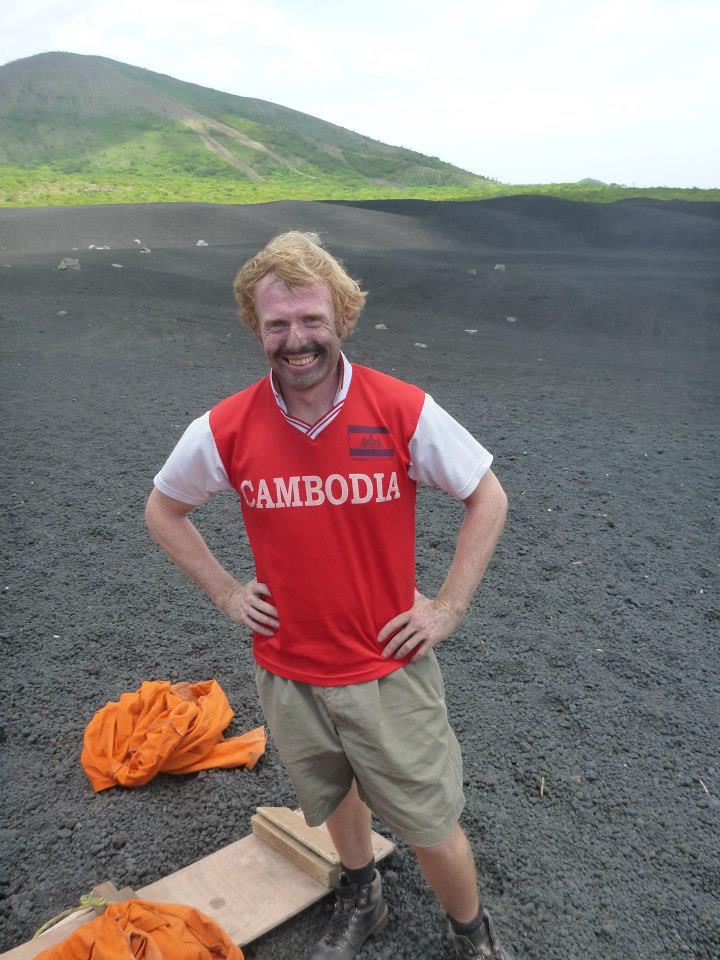 Cerro Negro Volcano Boarding read a sign outside a tour office in Leon, the second largest and one of the most beautiful cities in Nicaragua.

This charming city sits on the Chiquito river 90 kilometres northwest of the capital Managua and 20 kilometres from the Pacific Ocean.

A laid back city of markets and old architecture, including a baroque style cathedral over 200 years old, it is one of my favourite cities in Central America.

It wasn’t always laid back here and a turbulent 20th century saw former president Anastasio Somoza Garcia die after being shot in the city in 1956.

His eldest son, Luis Somoza Debayle, succeeded him but died of a heart attack aged 44.

His younger son Anastasio Somoza Debayle took over power but fled the country during the Sandinista revolution in 1979 before being assassinated in Paraguay the following year.

The Cerro Negro, Spanish for black hill, is located 25 kilometres northeast of Leon and has an interesting history of its own.

At 728 metres, it forms part of the Central American Volcano arc and is the newest volcano in the region, first erupting in 1850. Since then, there have been over 20 eruptions with the most recent coming in 1999.

Although there have been many eruptions and some fatalities have occurred, there are no large town or cities in its path. Most of the damage it causes is to crops in the area or deposition of ash clouds on Leon.

Because of its age it stands out from the surround hills, which are various shades of lush green vegetation. Cerro Negro, in contrast is dark volcanic stone.

This young volcano has sides covered in smaller stones the size of pebbles, making it more difficult to climb because your feet slide back down into the loose ground. However, it is ideal for the reason of my visit, to slide down it on a toboggan!

So, this was the historical and physical backdrop to my day out with a volcano boarding company who picked me up in their 4×4 from my hostel in central Leon for the hour drive to the base of Cerro Negro.

As we wound our way northeast towards the volcano with 6 other tourists on board on a clear sunny day, we didn’t know what to expect. None of us had done anything like this before.

I had been lucky enough to climb volcanoes like the famous Mount Vesuvius, but had never gone sliding down one on a toboggan.

I didn’t know of any reports of recent deaths doing this, so I assumed it must be safe. Still, I couldn’t help wondering what would happen if I came off at speed into the stones I was skimming over.

Our only instructions on exiting the 4×4 at the base of the volcano were to choose whichever board we liked the look and feel of most.

Simple in design, the boards consisted of a long piece of plywood curved at either end, with the bottom section smoother to allow it to slide over the stone more easily.

There was a rope tied to a hole in the front which would slow you down when pulled. Apart from some timber pieces on the upper side to rest your feet and backside on there was little more to them.

Boards chosen we undertook the walk up the volcano, which was slow going because of the heat and the loose underfoot conditions. Forty-five minutes later, everyone had made it to the at the top, keen to get going.

After a slow start, I gathered momentum finally reaching a speed of 40kph. Stone and dust kicked up as I tried to steer by moving my body in the direction I wanted to go.

I came to a stop before the end when I took a sharp turn and ended up with the side of my face in some surprisingly accommodating stones.

Not a scratch on me, but I was covered in black dust. The large dollop of sun cream on my face and neck made the dust stick well and difficult to wash off even in the shower.

Most of the group were faster than me, but nobody came close to the record which stands at over 80kph.

That may have taken a few runs and nobody was keen to go on another 45 minute hike in the midday heat to slide back down again.

I may not have been the fasted ever to grace its sides, but I enjoyed my slide down the side of an active volcano.