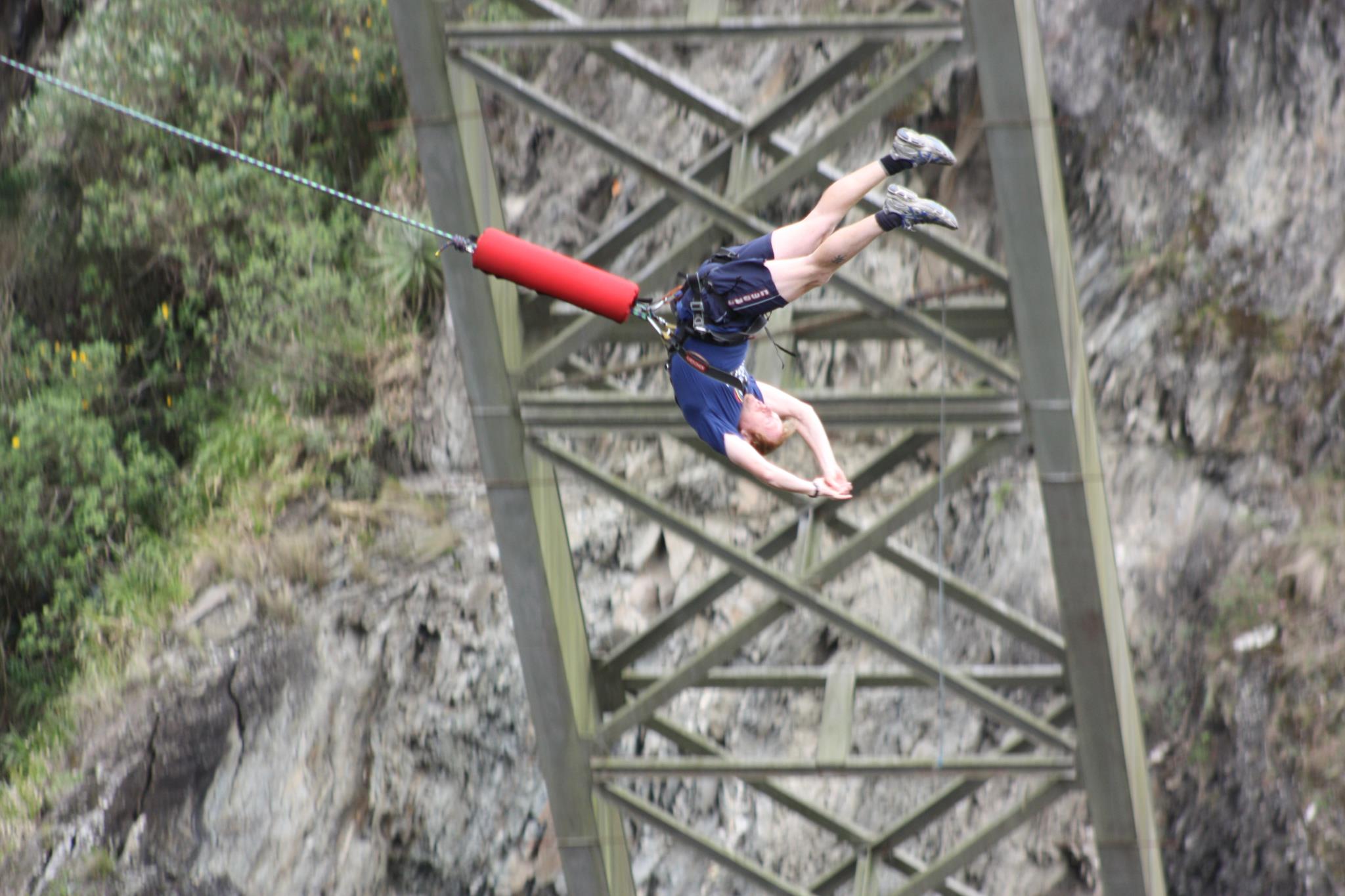 Baños de Agua Santa, or baths of holy water in Spanish, is a town in central Ecuador known for the healing properties of its surrounding hot springs. So powerful are the curative properties of the springs that they named the town after them.

It is also the capital of adventure sports in Ecuador with canoeing, kayaking, zip lining and bridge jumping among the most popular.

I had been told by a fellow traveller to try Puenting, which is a word people in Ecuador have for jumping off a bridge with an elastic rope tied to your ankles.

Unsure what it involved or how it differed from bungee jumping, I pencilled it in as a maybe.

At an altitude of 1800m, Baños is set in the foothills of Tungurahua volcano, making it cooler than the coastal cities such as Guayaquil and much more relaxed than the nation’s capital, Quito.

It is also the last big town before reaching the amazon to the east, making it a starting point for people going that direction.

As well as that, the Virgin Mary is said to have appeared at one of the many waterfalls in the area, which results visitors of all kinds flocking here.

Around this eclectic mix of visitors, enterprising locals have set up businesses to cater to their needs. Quality restaurants serving both local and international cuisine sit in the street alongside numerous shops selling statues of the Virgin Mary, while adventure tour companies entice you with photos of rugged, smiling people having the time of their lives.

Bridge jumping had almost slipped my mind completely when I rented a mountain bike to take in the scenery and waterfalls to the south of the town.

As I pedalled my way south into the dark green countryside, I saw a man standing on a bridge beside some equipment. Looks like he’s waiting for a lift somewhere, I thought to myself as I got closer.

“Puente,” he said as he saw me approach. It then dawned on me he was providing the bridge jumping service!

“Ah… How much?” I asked, totally unprepared to jump off a bridge that day.

The apparent value for money suppressed whatever reservations I had about a stranger on a bridge in Ecuador offering to tie me to one end of a rope and supervise as I jumped off the bridge.

I must admit to feeling nervous as he tightened the harness and made sure the rope was free of any obstacles.

“Just look ahead and not down,” was the advice.

Too late for that, I thought as I had already glanced down at the river below. It looked to be a good sixty metres, but I wasn’t sure.

I stood on the platform and looked straight ahead. Having already paid the twenty dollars, there was nothing for it now but to jump.

There was a silence followed by a whoosh as I went into free fall and the air sped past my face. The combination of sensory overload, fear and adrenaline made for one hell of a rush.

This jump differed from normal bungee jumping. Aside from the jumps being sold on random bridges like coffee from a van, I didn’t spring vertically back up like you do on a bungee. Instead, I swung back and forth under the bridge in a pendulum motion until almost stationary.

My second and third jumps were much more relaxed affairs. For one, I wasn’t surprised to be doing it. The first jump had me on a peaceful bike ride one minute, the next I was standing on the side of a bridge ready to jump.

I also knew what I was doing next time so didn’t need any instruction. All the guy had to do was harness me in and let me go. I also knew how the jump would go, a short free fall then swinging back and forth under the bridge.

I could even take in the views of the surrounding riverbanks and water below on my following jumps.

The one thing that was missing from my next jumps was the buzz I got from the first. Being prepared and knowing what’s coming took the rush out of the other jumps, but they were hugely enjoyable.

The three jumps took less than twenty minutes, and by the time I had finished, more people had lined up to jump.

Back on my bike fuelled by energy and adrenaline, I headed further south uphill to a place called Casa del Arbol or house of trees in English. Casa del Arbol boasts a magnificent view of the canopy below, where it is possible to have a drink in the café or take a series of ziplines down through the forest.

It was possible to do the five ziplines for the bargain price of fifteen dollars. At this price I couldn’t resist, first doing the ziplines and then returning for a well-deserved beer.