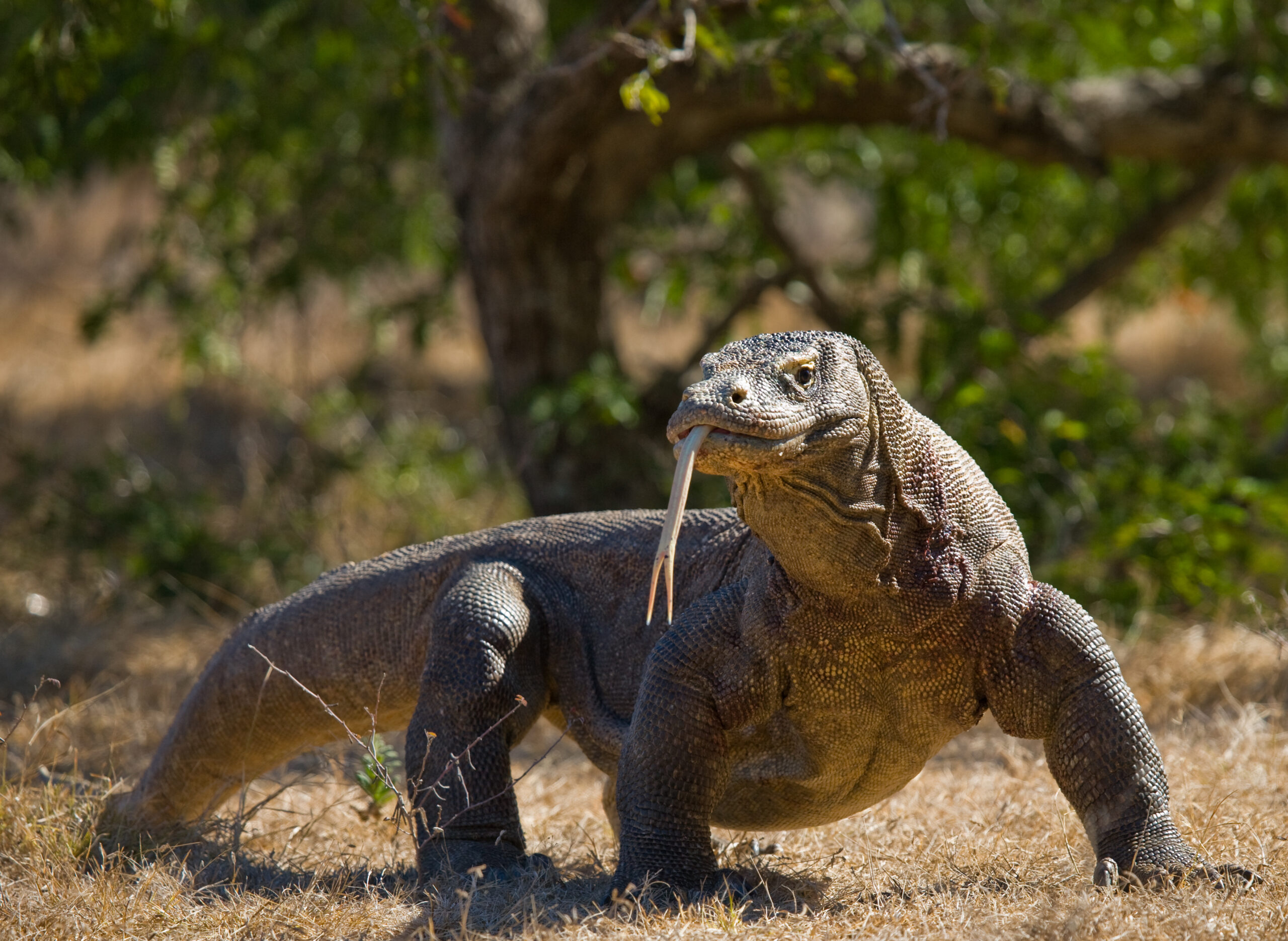 If you want a glimpse into the prehistoric world, then look no further than the Komodo dragon.

Long flat heads with eyes set wide apart to give them panoramic vision, this largest living species of lizard can grow up to three metres and reach weights of up to 70kg.

The fork tongue which snaps out of their mouths to test the air gives them a menacing presence.

At rest they have an air of serenity about them, just soaking up the sun in the daytime looking almost benign. But they are deadly when it comes to catching prey, which includes the relatively large Timor deer.

We can trace their roots back 40 million years to Asia when monitor lizards migrated to Australia, where the combination of abundant food and lack of competition allowed them to evolve into the giant lizards they are today.

Now inhabiting several islands in the central Indonesian archipelago, it is possible to see these magnificent animals in their natural environment. The most famous of these is Komodo island, where the national park and visitors’ centre is located.

Researchers originally thought that saliva from dragon bites was a way of bringing larger prey such as water buffalo down. However, this has been disproved, with death occurring due to blood loss and shock.

There have been cases of dragons stalking buffalo for days after biting it, but death was not because of killer bacteria in the saliva. Instead it was due to infection picked up when the buffalo retreated to the water to protect itself from the pursuing predator.

Bacteria in the muddy water caused the infection, and the dragon only moved in after the buffalo was incapacitated and unable to fight back.

Although they have been around for millions of years, they have only become widely known in the last century when Dutch colonial settlers reported seeing ‘land crocodiles’ in and around the island of Komodo.

A period of study and collection followed, with two dragons exhibited in the reptile house in London zoo when it opened its doors in 1927. Not long after, their hunting was banned and a strict limit placed on the numbers that could be taken for study to help preserve the population of animals that remained in the area.

When I left home towards Asia and Australia for a year of travel, there was one only one thing that I really wanted to see.

Forget about experiencing Asian street food, seeing Sydney opera house or going to a full moon party in Thailand. I wanted to see a Komodo dragon.

After arriving in the Indonesian tourist hotspot of Bali, I headed in the general direction of the dragons, stopping off on Lombok island to climb the magnificent mount Rinjani, a volcano which rises over 3500 metres above sea level.

The trip from Lombok to the western edge of Flores island where I organised the trip to see the dragons was 24 hours on a battered bus. There were also two ferry crossings but most of the time we spend crossing Sumbawa island.

The route the bus took across the island was about 400km, but the roads were winding and rutted with the driver constantly having to adjust his speed and direction to avoid potholes, oncoming traffic, or other obstacles in the road.

Packed with passengers, the bus was laden with heavy suitcases, families with small children, tourists, chickens and sometimes other locals who hopped on for a short time and were going between towns in Sumbawa.

This was my first time experiencing this kind of travel, and I loved it. The journey from Lombok to Flores was the most exciting bus trip I had ever been on.

The chatter of passengers, occasion chirp of a chicken or roadside food stop made this a trip to remember. And all of this even before I got the principal attraction of Komodo.

Although the national park office is on Komodo, there are dragons on the surrounding islands also including Rinca. Having come this far, I decided on a two-day trip visiting both Rinca and Komodo, spending a night on a boat just off Komodo.

My first sighting of a Komodo dragon will stay with me forever. Just after we set foot on Rinca, I spotted an adult dragon sat in the early morning sun, not moving a muscle.

As we got closer, I could make out the tough scales covering the entire upper side of the body and the occasion tongue flick to test the air and get an idea of what was happening.

That first sight reminded me of crocodiles resting on a bank motionless, ready to go from zero to all-out attack in a split second. Our guide Eka kept us at a safe distance while we admired these prehistoric wonders.

“They won’t attack a person, but we will stay a few metres away. Now (August) is the season when they lay their eggs, so we like to give them a bit more space this time of year,” Eka said as we looked on.

Since my trip to the Komodo dragons, it has emerged that females can lay eggs without fertilisation by a male. This discovery occurred after two females in English zoos laid eggs without having come into contact with males.

These occurrences in 2005 and 2006 resulted in all male hatchlings and it is thought that males are always the product of this type if reproduction in Komodo dragons.

We stayed on Rinca for a few hours, watching the dragons laze about in the sunshine with sudden bursts of energy and rapid movement, reminding everyone to keep their distance.

On Komodo we saw many more as they congregate around the visitor centre where it appears they are fed, but it is possible to see them elsewhere on the island as well.

Eka took us out for a walk, where we witnessed one adult male alone in a clearing. This one wasn’t as accustomed to people as the ones at the visitor centre and moved away from us quickly, its sturdy legs carrying its mean looking body in a side-to-side motion that made me glad it was going the opposite direction.

Two days spent in the company of Komodo dragons, seeing them in their prehistoric magnificence, was definitely the highlight of a year of travel.