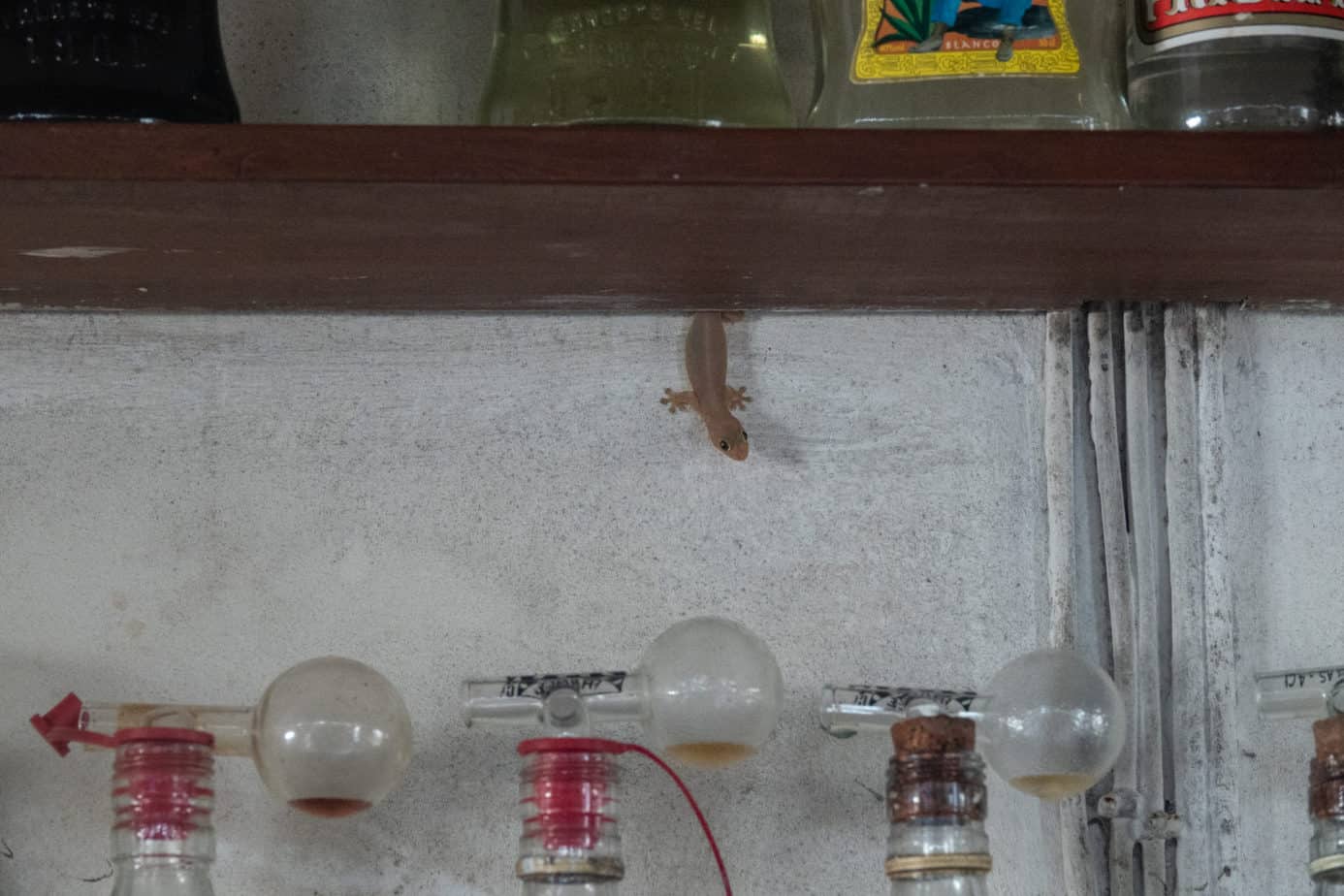 Behind the bar of a hotel called La Banane on the island of Sainte Marie off the East coast of Madagascar, a very rare species is found. The rum drinking gecko calls this place home. The hotel where they live is barely a stone’s throw from the port and these geckos certainly drink like sailors.

Stranded on the island due to a thunderstorm I sat in the bar studying the coloured bottles of rum lined up on the back wall, deciding which to have next.

As I worked my way through the coloured bottles I felt my senses had left me when I saw what looked to be a gecko appear from behind one bottle and make straight for the bottle top.

Curious about what was going on, I monitored him as he climbed to a point where there was a drop of rum adhering to the side. When he got to the desired spot he began to lick at the rum drop with his long pink tongue, eyes bulging.

Not so hard to connect what was going on here. Clearly this gecko liked his rum.

I sat on my barstool and he sat at the entrance of the bottle, both of us sipping rum and enjoying the afternoon rain. After he had finished his drink, he disappeared back behind the bottle he had come from, a bit more unsteady than before but seemingly happy enough.

On finishing my rum, I proceed to the next one along the line and suddenly another gecko appeared. I’m not sure if it was the same drinker or another one, but the same thing happened, lapping up a drop of rum before disappearing behind the bottle again.

When I pointed out what was happening to the barmaid, she just looked and laughed, but if one seemed to hang around the same bottle for too long she shooed him along. A kind of you have had enough for now, sir.

Most of the week I spend on spent on Ile Sainte Maire involved seeing these keen rum drinkers as it rained heavily near every afternoon.

The behaviour was always the same. After a rum had been poured, a gecko appeared shortly afterwards to mop up any left on the top of the bottle before going back to the comfort of the space behind the bottle.

When it rains on Ile Sainte Marie, there isn’t much to do but the rum drinking geckos in La Banane proved good company and are very sociable drinkers.