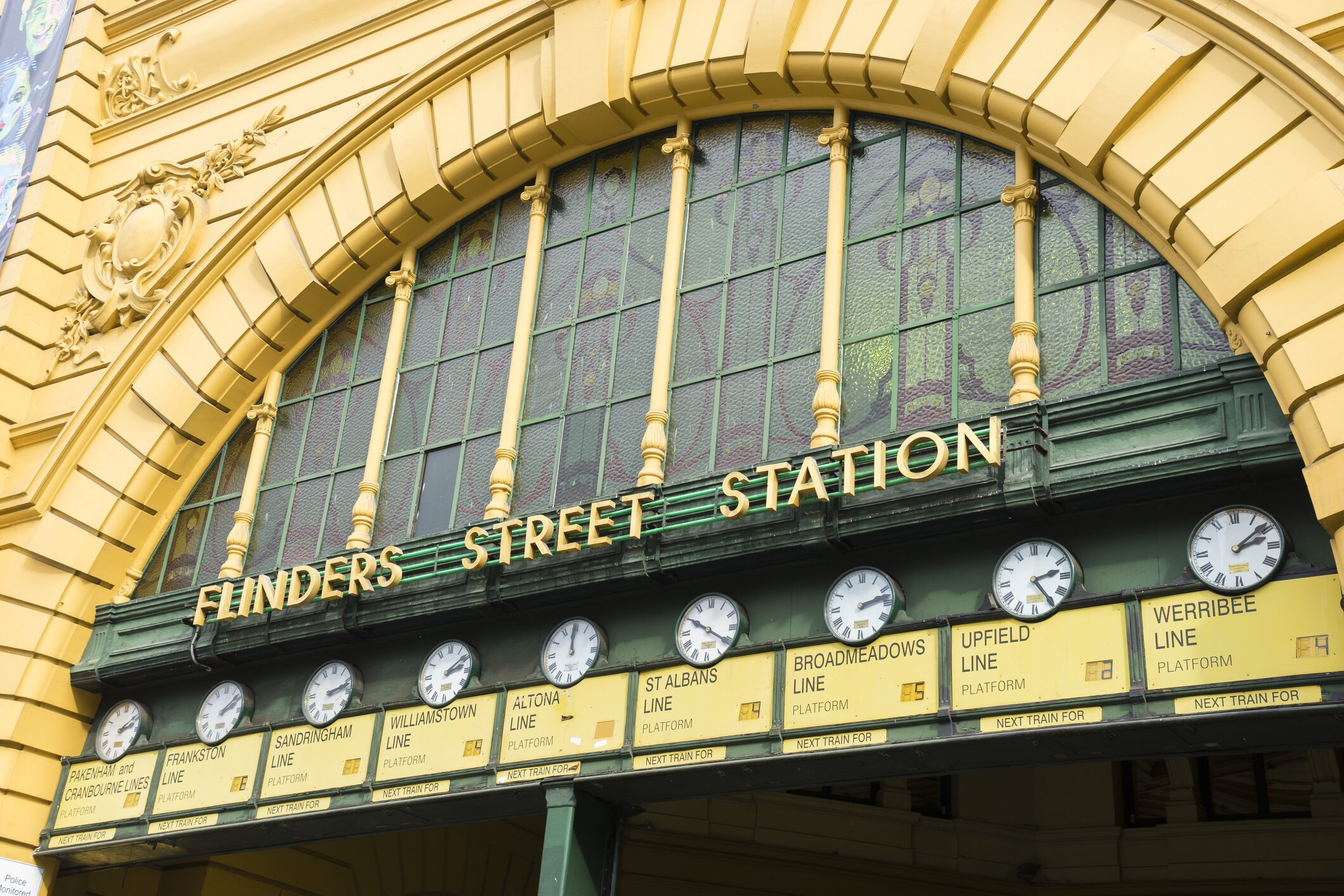 I’ll meet you under the clocks is a phrase used by generations of people to organise a rendezvous in Melbourne city centre.

The nine clocks over the entrance to Flinders Street railway station date from the 1860s and are some fifty years older than the current station, which was opened in 1909 after redevelopment.

Over the years, they have borne witness to life in Melbourne, including when it was reportedly the busiest station in the world in the 1920s with over 200,000 passengers per day passing through its doors.

Originally, the hands were changed manually with a long pole and it is estimated in a nine-hour shift the operator may have had to change them 900 times.

Set the corners of Flinders and Swanston, with the Yarra river to its rear, the station is right in the city centre. This central location and the fact that everyone knows where the clocks are means it has become a meeting place for everyone, from businesspeople to young couples, and holds an iconic place in the culture of Melbourne.

They have become such a part of Melbourne life that when they were removed in 1983 to make way for digital timekeepers, there was an outpouring from the public that saw the decision to remove them reversed in a single day and the clocks remained where they were.

Now updated automatically to keep pace with modern times, the manual operator has gone, but the clocks won’t be going anywhere soon.

I spent Christmas in Melbourne a few years ago and am proud to say that the friend I was visiting asked me to meet him under the clocks.

I liked Melbourne right from the start. Oozing with culture and with a more relaxed feel than Sydney, this city of magnificent old buildings merges with street art and great coffee to make it really stand out.

The clocks make up one part of the interesting history of Flinders station and facts mix with fables to add to the mystery surrounding one of the oldest buildings in the city.
Opened in 1854, it was the first railway station built in an Australian city, with steam trains running between there and what is now the modern-day Port Melbourne.

The station became progressively busier until it reached its peak in the 1920s. Redevelopment of the city in the twentieth century meant things became less centralised, with daily passenger numbers now running at under 80,000, less than half of the 1920s peak.

The original station was demolished in 1904 and reopened five years later, rebuilt in French Renaissance style. Made up of yellow stone and red brick, this building dominates Flinders Street and is one of the focal points of the city.

The clocks survived the rebuild and are the one of the only parts, if not the only, that remain from the previous building.

This brings me to one of my favourite tales about Flinders Street station. In 1899, a competition was held for the redesign of the building. The winners James Fawcett and HPC Ashworth won with their French Renaissance style design.

However, there is a story which says the plans were switched with the Chhatrapati Shivaji station (formerly Victoria) in Mumbai, resulting in a station which looked somewhat Indian in design in Melbourne and a more European structure in Mumbai. Although I doubt this is true, it does makes for a great story of intrigue and skulduggery.

Every old building has tales of hauntings and Flinders station is no different. I know of one story, but there are probably many more.

Legend has it that the ghost of an angler looking out in the direction of the Yarra river appears on platform 10 with his fishing gear and then disappears. This is believed to be the ghost of George Mansfield, who died in the river in 1902 after a boating accident.

If the clocks at Flinders station could only talk. They have looked down on people meeting for well over a century and out onto one of the busiest thoroughfares in Australia for all that time.

The great and good have walked under them, including the Olympians of the 1956 games, and they have seen constant change.

Not only outside the station but inside also where renovation and modernisation battled to take over, but the people of Melbourne remained steadfast in their will to hold on to this wonderful station and the clocks at its entrance, which possess a character all of their own.