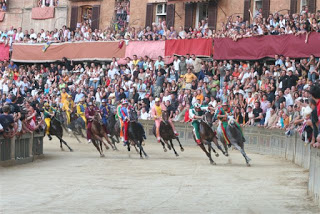 The Italians combine culture and Machiavellian tactics better than any other people I have ever encountered.

Nowhere is this clearer than in the picturesque town of Siena. Situated 80km south of Florence in rolling Tuscan countryside, this UNESCO listed heritage site of just over 50,000 people is a popular tourist destination.

As well as the well-preserved city centre, it is famous for its food, art, museums and its Palio, a horse race like no other which takes place twice a year around the Piazza de Campo, the city’s main square.

Slow and cheap inter-railing trains took me here from the northern part of the country, taking in the fabled cities of Florence and Venice along the way until reaching Siena, a place I had never heard of.

By sheer coincidence I arrived on the 16th of August, the day of the second Palio of the year, the first being July 2nd.

The heritage of the Palio makes it the most unique festival I know of. Stories of its origin vary with some dating it back to Roman military training in the 13th century.

My preferred version is that the Grand Duke of Tuscany outlawed bullfighting at the end of the 16th century and the contrade or town districts began to organise races. Initially, it was with buffalo, then donkeys, but from the early 17th century the first modern Palio took place on horseback.

The race on the 2nd of July is called the Palio de Provenzano after the Madonna of Provenzano and the Palio Dell’Asunta in honour of the feast of the Assumption takes place on 16th of August.

Organising a three lap race around a square 333 metres in circumference is more complicated that it sounds.

There are seventeen contrade and only ten horses in the race, so the seven who did not compete in the last race are automatically entered while the remaining contrade draw for the three remaining places.

It only gets more complicated from here, as each contrade does not know which horse they will race until a draw is made a few days before the race. The jockeys are chosen in advance and are often professionals who aren’t averse to taking a bribe.

Several inches of specialised turf is laid around the perimeter of the square with as many spectators as possible packed into the centre, which is free to enter. Above the square, there are expensive seats and some houses also open their doors to spectators for a price.

Before the off, nine of the horses line up inside an area before the start line while the tenth horse waits outside. This final horse approaches at pace and if the starter is happy with everything the race proceeds. If not, the race is aborted, and the entire process starts again.

Depending on deals and skulduggery before the race, certain jockeys may have arranged to assist or impede others which can also lead to interruption to the start.

Once underway, everything seems to be legal apart from pulling on the reins of a rival horse. Jockeys are permitted to use their whips, not only on their own horses but on rival horses and jockeys as well.

A Palio or banner is given to the victor. Each one is specifically created, and hand painted by a local artist. The Palio is a significant source of pride for its winning contrade with wild celebrations taking place in that district.

Even more strange than open bribery and being allowed to physically interfere with a rival jockey is the sight of the winners sucking dummies or baby bottles full of wine. This is because the winners of the Palio are said to be reborn.

Incidentally, seeing a rival contrade failing to achieve victory is almost as good as victory.

Being a big sports fan, I know of some bizarre attempts at manipulation of results from Lance Armstrong’s seven wins at the Tour de France to Plateau United Feeders 79-0 victory over Akurba FC in a lower league of Nigerian football in 2013.

The Plateau team were in line for promotion so they organised an improvement in their goal difference by putting 79 goals past Akurba, 72 of which were scored in the second half!

But these pale in comparison to the Machiavellian tactics employed in the Palio. Open bribery, arrangements between jockeys, as well as alleged kidnapping and drugging of horses of rival contrade add up to the most bizarre sporting event I have ever been to.