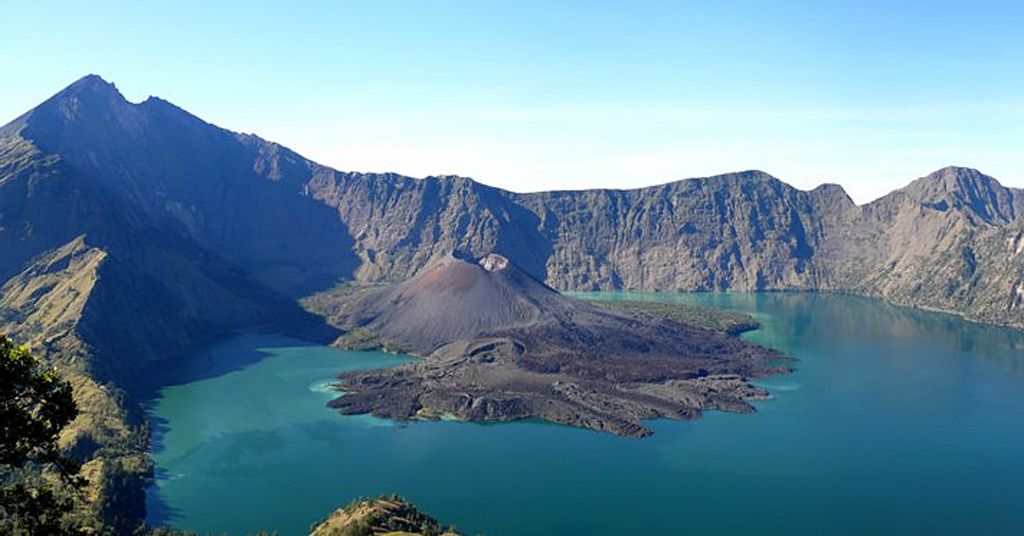 Rising 3726 metres above sea level and sitting in the northern half of the island of Lombok, Mount Rinjani is one the most magnificent sights I have ever seen, its beauty etched in my mind to this day.

A cone shaped active volcano that last erupted in October 2015, Rinjani was a difficult hike. The fact I spent the bones of the previous year drinking beer and eating pizza in Australia didn’t help much.

It was the first time I had my breath taken away while travelling. Staring over the rim of Rinjani into the crater below, “Wow,” is all I remember saying.

From my spot on the edge of the volcano I viewed a turquoise lake hundreds of metres below which encircled another smaller volcanic cone. So essentially, I was standing on the side of a volcano looking at a lake inside the crater which surrounded another volcano.

When I arrived in Bali after my year in Australia, I went east towards the Komodo dragons and Rinjani was on the way, so a first trip up an active volcano seemed a good stop along the way.

I have always been fascinated by volcanoes and one thing I really wanted to see was an active volcano erupting, which I did in 2015 when I climbed Nyiragongo in DR Congo and peered over its side to watch the bubbling lava lake inside.

The trip started in the village of Sembalum Lawang, a village with a magnificent view in a valley at the base of Rinjani.

Pretty gentle start, this hike might be too bad, I thought to myself as our little group trekked out of the village on a gentle upward slope past farmsteads with people busy tending crops and livestock.

Two hours later I realised my initial assessment was wrong as I huffed and puffed up the hill on this well-worn trail in the sunshine.

We stopped for water and sugar laden biscuits provided by the porters who bounced along in flip-flops carrying gear that looked like it weighed a ton. On we plodded into the afternoon until we reached the side of the volcano over a final craggy hump.

Most people have heard the term value for money, but a new phrase springs to mind when I think back on the initial view I had over the side of Mount Rinjani, value for effort. Although I found it a hard eight hours hiking, the reward was a view that stopped me in my tracks.

It was as if the others in the group disappeared and I stood there alone, so transfixed by standing on the side of a volcano staring into its crater lake below.

In terms of effort and energy used to make it from the start of the hike to the craters edge, this was the best value I ever had.

That night, wrapped up against the cold above cloud level away from any unnatural light, I got a view of the night sky like I had never seen before. The brightness and intensity of the stars from the dark of my vantage point left me staring for hours, appreciating how magnificent a location I was now in.

Under this night sky the alarms rang and sleepy hikers left their tents at 3am to reach the summit for sunrise.

I had commented to the group the previous evening that I thought the hardest of the hiking was over, as the summit looked so close. Into the night we hiked and within half an hour the walking became tougher than the previous day.

It was now steeper than before and the scree which occurred nearer the summit made walking more difficult. You would take a step up, but then your foot would slide back down much of the way as you displaced the scree with your weight, meaning that each step gained only a little ground.

The altitude, the difficulty making progress and my current lack of fitness meant I found it hard going. I scrambled up the last section before the summit on my hands and feet more than relieved to be at the top.

We made the summit for sunrise and took in the sun as it lit up the volcano top and bounced off the fluffy white clouds below.

I’ve always been more of a sunset than sunrise type of person preferring to appreciate and reflect on a good day, but I even had to admit the 3am start was worth it to see a view like this.